More than 400 students across Queen Mary, University of London must complete a compulsory Year Abroad (YA) as part of their degree. It is one of the most anticipated, memorable (and for some, daunting) parts of a student’s degree. Following feedback from students in previous years, it became apparent that there was a need for a new resource which sought to connect students across years, provide information about the YA Experience, and create an opportunity for informal discussion.

The new SLLF ‘Year Abroad’ Community on the QMPlus Hub will provide the space needed for a big ‘Year Abroad Conversation’ between students in first to final years across the School, and also between students and staff. Connecting students in different years will provide them with important information, insight and know-how, enabling them to make informed decisions and to make the most of their YA experience. For example:

The SLLF ‘Year Abroad’ Community seeks to provide a new social dimension to the YA Experience, and add several interactive elements and opportunities for discussion that may not otherwise be possible without the QMPlus Hub.

Necessity of a New Community

Currently students have access to one of a series of QMPlus modules by ‘cohort’. These modules house mainly administrative resources, such as the YA Handbook, template forms and events promotion. However, there was no single online YA space where more qualitative activity took place, or where the overlapping needs and interests of students in different years were met. Other than through organised events and students being put in touch by academic staff (which is time-consuming), there was no way to find information or talk to students who have already been on a YA or who are at the next stage of planning. For example, final years could not connect with first years, and second years could not contact students on their YAs.

Feedback from the annual YA survey makes it clear that whilst QMPlus YA modules are valued for their information on procedure, there is demand for another kind of learning space for students – something less formal, more immediate and which keeps students connected, facilitates cross-year exchange and provides more information and advice.

The original forum is a now moribund ‘Help, I’m going on my Year Abroad’ group (www.facebook.com/groups/138074220036). Intended as a student-managed space to talk about the YA, it has become increasingly loosely administered by students who have not been on an SLLF YA. A lack of focus, structure and content, combined with its open membership policy (many members have not studied abroad) and insufficient moderation, means that it is no longer fulfilling its original objectives.

QMPlus Hub can definitely meet our students’ needs. The Hub can provide a single, dynamic space for students across all years to interact and work together as content creators, rather than simply receiving information. The features and capacities of the Hub will enable students to learn more about the YA, and enhance their experience. For example, students can:

The QMPlus Hub also helps to:

The ultimate goal is for more students to report that they were well-prepared, well-supported and enabled to make the most of their YA and beyond.

Before approaching the QMPlus Hub and exploring its capabilities, it was necessary to develop a productivity planner to coordinate the activities of the two-month project (Appendix A). This would set out the number of hours designated to each task, as well as individual phases within which certain ‘pages’ and ‘tools’ could be produced. This project was unique in that a QMPlus Hub group of this size had not been created by the School of Languages, Linguistics and Film, so we understood that the time spent on each task may change as the project progressed, and as we gained more insight into what the QMPlus Hub was capable of.

As a primary guideline, an initial website layout was also created (Appendix B). By this point, we had a vague idea of the potential layout and tools that could be implemented. This would provide an excellent starting point in the development of the group.

Exploring the QMPlus Hub
Following the initial discussions of the SLLF ‘Year Abroad’ Community, we explored the features of the QMPlus Hub. We realised there was a degree of flexibility in the layout of each page, so we could customise according to our needs and initial plan. However, there was a need to introduce colour, easy navigation, and a ‘brand’.

For example, we felt it necessary to include a navigation bar so that students can easily access ‘Practical Tips’ pages from the homepage. However, the navigation bar for a collection of pages on QMPlus Hub (Fig. 1) is not particularly attractive, and may not draw users in. As a result, we used the Button Optimizer website (http://www. http://buttonoptimizer.com/) to create our own buttons (in ‘PNG’ form), embedded them as images, and used the URL feature on QMPlus Hub to connect each image to the appropriate page. This method allowed us to create a more colourful and uniform way to present the pages (Fig. 2). 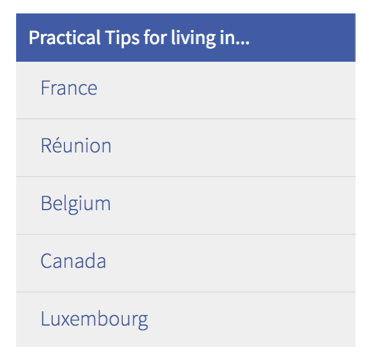 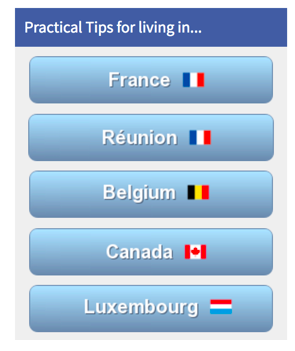 After exploring the capabilities of the QMPlus Hub, we were able to examine how we could combine this resource with other online tools to create an interactive social environment. The Hub’s coordination with Google was particularly useful as it allowed us to include Google Maps (for interactive maps), Google Forms (for students to check-in) and Google Spreadsheets (for showing students who have checked-in). It was relatively simple to include these features on the QMPlus Hub, and they have helped boost the interactivity aspect of the Community.

After several weeks of reorganising and exchanging ideas, the SLLF ‘Year Abroad’ Community continued to evolve and saw redesigns of some images to create a sleek look and feel. We moved away from clipart and black fonts, and introduced more images, consistent fonts and colours, and design consistency across all pages.

The first step to creating the ‘how-to’ video was to consider which tools would be highlighted in the 2/3 minute long clip, and how these could be described in an engaging and appealing way. After deciding the tools and ‘feel’, the script was written, as this would allow timings to be planned and the concept to emerge. The ‘how-to’ video was then created using a variety of programs and websites. These included:

The feedback for the video was positive, and only slight changes were necessary, such as small additions to the script.

Promotion of the Community, and Introduction of Students

When most of the Group had been completed (including interactive maps, check-in pages, ‘Practical Tips’ pages and Year Abroad Ambassador section), we were able to invite the first students on their year abroad. Students were to be invited gradually, beginning with those who had already started their year abroad and Ambassadors. Over the course of the following one to two months, we could invite final years, then first and second years. It is hoped that all years could then engage.

Promotion of the Community has been possible through flyers and posters emailed to the students. These summarise the features of the SLLF ‘Year Abroad’ Community, and emphasise the social aspect and usefulness of this resource.

For continued and refreshed use of the Community, guidelines and written tutorials were created for staff in order to implement changes at the end or beginning of each new academic year. This could include ways to update information, reset the map and check-in tools, or embed new media. The example shown (Appendix C) demonstrates how an administrator may add new images and text.

It is very difficult to quantify the results of this project because the SLLF ‘Year Abroad’ Community is an environment that should grow and develop over the course of several years as more content is added, and experiences are shared. Despite this, some short-term targets have been set. For example, it is hoped that 100% of first years starting September 2017 will be participating, or have at least accepted membership, in the Community by the end of October. It is also expected that 90% of second years will be involved in the Group, and at least 50% of the overall target audience will be actively engaging in the discussion and features. As of 5th October 2017, there are 75 members, which is almost a quarter of the expected members, and more students accept their invitation each day.

The Year Abroad Ambassador Workshop, held on Wednesday 4th October 2017, provided the new Ambassadors with information regarding their responsibilities. It is hoped that through their engagement with the SLLF ‘Year Abroad’ Community, more members of the group will contribute to the discussion. Once again, it is difficult to quantify the success of this scheme in the early stages of the Community, but their involvement should lead to more participation.

Student feedback will be encouraged in the end-of-year survey that is distributed in the summer of each academic year. This Year Abroad Survey will help the administrators to understand what direction the Community could take, and what students think about it. This will be one key factor in examining its success.

Entering this process, there was a brief plan of the direction that the SLLF ‘Year Abroad’ Community. We acknowledged the purpose and aims of this Group, and there were some ideas outlining the design (Appendix B). However, the project has evolved organically as more ideas have been introduced and as we have discovered the possibilities and limitations of QMPlus Hub. Thus, one key piece of advice would be to allow the overall purpose and design to evolve and develop throughout the process as you become more familiar with the functionalities. It would be useful to remain flexible in what is expected from the project.

Additionally, if the user wishes to create an environment that will last for years to come, it is essential to implement features and tools that either can be easily updated at the beginning of each year, or do not contain information that will become out-dated rapidly. This ensures longevity and sustainability.

For the SLLF ‘Year Abroad’ Community to reach its full potential, the capabilities of QMPlus Hub may need to be enhanced. For example, these are some of the obstacles that were faced throughout the process of creating the Community:

However, despite these obstacles, which may be targeted following future updates of QMPlus Hub, the features that are provided are excellent for fulfilling the general purpose of the system: encouraging discussion and engagement between students.

It is hoped that the growth of the SLLF ‘Year Abroad’ Community will enhance the Year Abroad Experience for hundreds of students of Queen Mary, University of London. To reiterate, the primary goals of this community, as outlined in the original project brief, were:

(with staff input limited to substantial administrative activity over the summer, including overhaul and restructuring if required).

However, as a source of information, advice and general discussion, the Community has the potential to develop and evolve according to the needs of students.

In the coming months, it is expected that QMPlus Hub will become a more prevalent component in the academic lives of QMUL students, and while the platform will hopefully continue to increase in popularity, there is no doubt that the SLLF ‘Year Abroad’ Community has become one of the first major groups to demonstrate the technical and social capabilities of QMPlus Hub. Through promotion, engagement, and great input from Year Abroad Ambassadors, the Community has the potential to help students ultimately feel prepared, supported and excited for their Year Abroad work placements, study placements, and postgraduate experiences.